In my last blog, I related the case of the boss who did not listen, and actively discouraged the advice of the very specialists he hired. An historical, but famous example of this recently came to my attention.

In a recent onboard flight magazine, I came across an article recommending things to do in Stockholm. Among the list was the Vasa Museum. I remember visiting it on one of my earliest QFD trips to this beautiful Scandinavian country. It was impressive to see the fully intact 135 foot wooden warship from the 17th century despite it being lost under water for over 300 years.


From my QFD perspective, the ship’s history offered interesting insight to the management style problem discussed in “The unreasonable boss - when executive solutions become design constraints.”
Vasa was commissioned by King Gustavus Adolphus (1594–1632) to flag the nation’s largest and most powerful naval force at the time. But immediately after leaving the dock on its maiden voyage in 1628, the ship sank in the Baltic Sea.

Why? Too many design changes as after-thoughts, lack of specifications and documentation detailing the ongoing design changes and modifications, unclear division of responsibility, unrealistic schedule demand, the project mission that got blurred by those changes, and stunted communication between the customer (king), producer (shipwright and builder), and operator (naval officers in charge of testing and navigation).


In particular, the changes that the king ordered after the timbers had been cut to size and the ship’s keel had been laid exacerbated the ship’s instability and ballast deficiency. Other late changes also shifted the project mission unwittingly.

For example, adding the second gun deck (after learning Denmark was building such a design) not only increased the weight burden (too many cannons) but also changed the main objectives of naval war tactics (from crippling the enemy ship with firing volleys from one deck and taking over onboard to capsizing the enemy ship by broadside firing from two decks).﻿﻿﻿

﻿﻿﻿﻿In those days it was customary for warships to have ornate decorations that glorified the king. Again, many more sculptures were added on Vasa than its original design. Each measuring 10 feet long, you can imagine how heavy 500 sculptures were to the 135 foot ship.


None of the workers and subordinates had the courage to reveal these structural problems to the king, who had issued a threat against anyone causing schedule delay.

As we discussed in our previous post, Modern Blitz QFD® tools can help analyze and offer solutions to these scenarios.

Readers, can you follow the process described in that post and do your own analysis of the advantages and disadvantages of the king’s orders for the Vasa project?  Please share your analysis and questions with us in the comments.

An acquaintance of mine recently complained that her new boss just didn't listen. She was recently hired by a large sports wear chain to manage their social media and promotional events in advance of their entering new markets and attracting new customer segments.

The owner, it seemed, was so attached to his ideas of how to promote because of his past successes that he could not comprehend that the new customers he wished to attract needed to be approached differently. His most recent demand was that because his children liked popcorn, he told the marketing team to rent an old-fashion popcorn cart for the product booth at a street fair in 100°F weather. 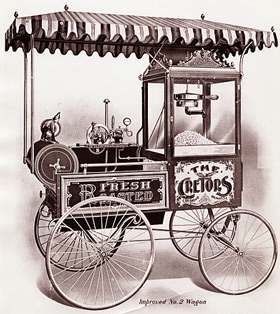 What bothered my acquaintance most, however, was that her direct boss and other managers were afraid to challenge the owner's positions. Whatever he demanded, he got.

QFD has some solutions to such a scenario. Whether it is the boss or the customer, proposed solutions need to be translated back into functional requirements, and then into solution-independent needs, so that better solutions can be examined to achieve those needs.

In the sports wear store example, the popcorn is a solution to what problem or need? Can we analyze for the owner the advantages and disadvantages of popcorn.


Popcorn's aroma attracts attention. Functional requirement: Attract attention. Need: Our booth stands out in a crowded event. What other ways can we stand out on a hot day? How about misting fans? Handing out folding fans?

Popcorn is something kids love to eat. Functional requirement: Distract kids. Need: Keep kids entertained while mom looks at our sports wear. How else can we entertain kids on a hot day? How about water guns?

Popcorn from an old-fashioned cart shows we are traditional and have been here a long time, and will continue to be here a long time in the future. Functional requirements: Show we are your neighbors and a trusted part of your community. Need: We are a trusted place to shop. How else can we build trust in this new market segment? How about our brands, satisfaction guarantees, our current customers who are respected in the community?

Food sales require a city license, trained operators, food handling protocols. This is a constraint that makes it expensive and time consuming. Our focus is to sell sports wear, and the popcorn could be a distraction.

Popcorn oil can damage our sample products. Kids and adults eating the popcorn and then touching the products will leave fingerprints and stains that will make our samples unattractive and discourage potential shoppers. This is another negative.

If you have attended a QFD Green Belt® course, you remember that this solution-to-need translation is the job of the Customer Voice table and that the analysis of solution constraints is the job of the Maximum Value table.

Both are new tools  in Modern Blitz QFD®. These are core tools in the QFD Green Belt® Course offered in St. Augustine on October 21-November 1, 2012.

A civil revolution is taking place in one of the world’s most politically stable places, Japan, whose citizens are known for social conformity and respect for authority.

Tens of thousands of ordinary Japanese are filling the streets of Tokyo and other cities, not just for a day or two but for weeks now. They are protesting against the government’s decision to re-start the nation’s nuclear power plants, following the multiple nuclear core meltdowns in Fukushima last March.

The Japanese government and industries want nothing more than a quick recovery from last year’s natural disaster-turned major nuclear catastrophe. So they are pushing for a rebuilding of the disaster-stricken region and restoration of economic/industrial output through conventional means, which include re-starting the nation’s nuclear power program.

But this return to “business as usual” approach is too reckless, the protesters say, because the nuclear plants are being restarted with unprecedented fast-track approvals that ignore the lessons of Fukushima. Indeed, a leading seismologist from Tokyo University says some of these nuclear reactors sit right next to the “Devil’s Triangle” where the northern and southern halves of Japan’s crustal plates meet.


Could another nuclear plant accident resulting from earthquakes occur in the near future? In Japan, where nuclear power comprised nearly 30% of electrical production, what is the best next step for economic production, civil activities (trains, air conditioning, etc.), and safety for future generations?

Here in the U.S. heartland, as we endure the sweltering, record-breaking summer heat of over 100°F and multi-day power outages, we can appreciate the concern of all sides in Japan. How do we choose between the stable availability of air conditioning vs. a decades- and centuries-long threat of radiation to our air, food, and water? Do we accept compromise and trade-offs, or are there new ideas? Do we have the necessary innovative vision and strong leadership? We quality practitioners have wrestled with this dilemma for decades.

“It is not necessary to change. Survival is not mandatory.”

Just a few days ago, the Japanese once again rose to Dr. Deming's challenge. Its parliament released a Fukushima study that identified the physical, procedural, and regulatory safety flaws, and concluded that the Fukushima nuclear incident was “profoundly man-made” by the negligence of the plant operator and the culture of face-saving, non-transparency, regulatory collisions, and exclusion of opposing views, all of which exacerbated the severity of the incident.

In QFD, breakthroughs can come from both technology advancements and a better understanding of solution-independent customer needs. Also, when designing for a project like a nuclear power plant, it is important to anticipate the low-probability high-consequence risks that traditional FMEA does not handle well (see How To Handle VOC Issues — Lessons from Japan crisis: Anticipating Improbables with Irreversible Consequences).

In the short-term, the people of Japan are becoming more vocal in their needs and demanding providers (including the government and energy companies) be more innovative in their thinking and responsive to citizens and customers, respectively.