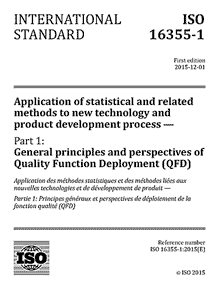 Since 2009, an international team of QFD experts convened by the QFD Institute has been writing the new ISO standard 16355 for QFD. The Part I is now on sale through various standards organizations listed below.

The purpose of the standard is to guide the global community of QFD practitioners, international businesses, and Quality and Design professionals in complying with the skills they need to achieve 21st century levels of innovation and quality in their new products.

To comply with this standard—more accurately, to be able to use the standard successfully, you must possess important QFD foundations.

Simply copying from the standard will not help achieve the desired success. You must know how to tailor QFD methods discussed in the standard, you must be able to distinguish which QFD tools and which deployments in what sequence are best for your project, not falling into copying something that turns out to be detrimental to your particular project.

To develop the sound QFD foundation to comply with ISO 16355 and develop successful product development skill-set, consider proper training. This will save you from making costly mistakes, wasting resources, and project failure.

The papers and links referenced in the standard and its Tool Matrix have been complied in a 1400+page eBook, which was complimentary to the March 2016 QFD Green Belt® attendees. After that, this eBook is available from the QFD Institute. It contains case studies using the tools cited in the ISO 16355 as well as other resources.

The QFD Institute is issuing Call For Papers for its 2016 International Symposium on QFD (ISQFD). Interested parties are invited to send a paper proposal by May 01, 2016.

This symposium welcomes participation from all countries and industries. Both completed projects and those still in progress are candidates for presentation.

Speaker benefits include discounts for the symposium and QFD courses in Boise.


More about this International Symposium (ISQFD): 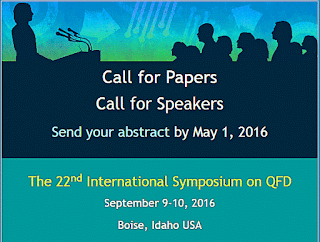