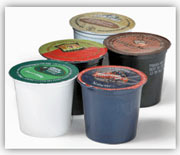 You insert a small disposable coffee pod (the photo on the left) into the machine, push a button, and out comes fresh brewed coffee with the flavor, strength, and style described on the package.

People love the convenience, easy care, and fresh coffee aroma with each cup. But have you ever thought of  the environmental impact after their use?

Made of plastic and/or aluminum, some pods can be recycled, while others are not. But how often have you seen a recycle bin provided in hotel rooms or offices where these single brewers are used?  How many people carefully sort out the recyclable pods during the morning rush?

The sad reality is that the majority of these pods currently end up in landfill —  now a 3,000,000,000 per year problem in Germany alone, according to March 1, 2016 National Public Radio blog "The Salt". 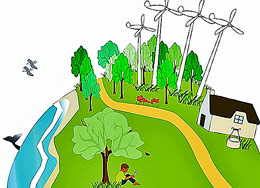 In New Product Development, the concern for sustainability is too often treated as an 'either-or' tradeoff, such as "you can have convenience or environmental friendliness, but not both".

But you can resolve this dilemma and do a better job at designing sustainability in your new product by using Comprehensive QFD and deploying Sustainability independently during the design phase.

Those with Modern QFD training can also supplement the Maximum Value table in Blitz QFD® with an Environmental Value table.