Back in 2016 we sensed General Motors was onto something when we saw one of their VPs on the Autoline THIS WEEK. In that TV interview, she emphasized "mobility" as the company's new business strategy into the future, responding to the shift in the customer needs from being a car owner to a mobility user.

In fact, GM had filed for the trademark "General Mobility" around the same time, we hear, suggesting that top management had been working out the strategic transformation for some time, in order to stay sustainable in the face of recent car-sharing and on-demand transportation business models as well as consumer preference for convenience and economic efficiency over the traditional ownership prestige, and anticipation of new technologies such as autonomous vehicles.

It was not until 2018 when their number one Japanese competitor caught the wind of this. At the 2018 CES trade show, the president of Toyota Motor Company announced that his company, too, aims to become a "mobility service company," in spite of their long standing position as a manufacturer of "cars that give you pleasure in owning" as emphasized by frequent commercial campaigns "Let's Go Places" by driving their cars.

While we root for both companies to succeed, one wonders,

Are there tools that QFD can offer?

The September 2019 International Symposium on QFD (ISQFD) will include a tutorial precisely on this subject.

To remain sustainable in the long term, an organization needs to be able to systematically and rapidly adapt/transform its products, services, business models, resources and enterprise infrastructure in response to the changing business environment. To accomplish this in a coordinated manner, the business needs to be considered as a socio-technical system operating within a very complex and highly dynamic environment.

More often than not, the changes in market expectations and technological capabilities demand transformation across multiple organizations in integrated supply chains, where some businesses will be software intensive businesses, while others focus on physical offerings. These changes are being accelerated with the emergence of Internet of Things and Industry 4.0 developments and capabilities.

The tutorial "QFD for Business Transformation" will introduce the principles and relationships between Modern QFD and business transformation planning and development for businesses. The tutorial will reference relevant sections in the new ISO 16355 standard for QFD, and give attendees exercises to connect the principles and key methods, particularly Hoshin Kanri, the initial analytic stages of QFD, and prioritization and methods like analytic hierarchy process (AHP).

The tutorial will consist of approximately 1 hour of lecturing and 1 hour of exercises using a case study from 'Space logistics systems' scenario.

This tutorial was developed by three QFD Black Belts®: Dr. Kim Stansfield, Steve Dimelow, and John Fraser and has been successfully taught in UK at INCOSE (systems engineering) conferences.

This September, please join us to gain new knowledge and skill-set on this important subject.

The 2-day ISQFD including this tutorial is complimentary to those who sign up for the QFD courses.

To inquire about this tutorial, ISQFD, and QFD certificate courses, please contact the QFD Institute.

This might come across as strange but we once heard a Navy officer say their number one enemy is the Air Force. It was meant as a metaphor describing how different divisions within an organization fight for the same resources.

Similar situations can be found in the business world. One product division views another as their number one competitor to be defeated, a sales force competes for a territory or market share with another department in the same company, or a VP demands a budget for her group's project pushing back against another VP doing the same for his.

Internal completion is good generally, but when leadership is disconnected for various reasons and travels in conflicting directions, it becomes a problem. It leads to unnecessary redundancy, wasted resources, broken team spirit, and diluted market focus.

While it might not always be possible to cause leadership to change his/her mind, what if you could offer a single view of company activities, market, and competitive environment that everyone can work from? What if you could offer a versatile structured analysis that enables the leadership to see current market direction as well as help them formulate strategic responses to changing elements in the future in a systematic way?

Here is a case study that used Quality Function Deployment (QFD) to surface the market predictions and AHP to discuss and decide on future events, showing the ways to achieve agreement and alignment among the leadership: "Predicting Future Health Insurance Scenarios using Quality Function Deployment (QFD) and Analytic Hierarchy Process (AHP)". This case study was done by Carey Helper and Glenn Mazur and was presented in 2008 (ISBN 1-889477-20-6). Here are some of the analysis used. 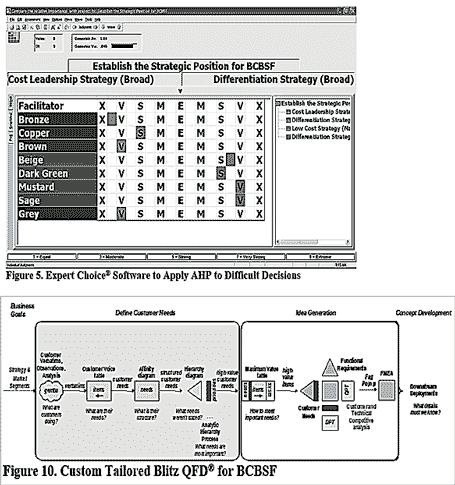 Mr. Carey W. Hepler is one of our QFD Black Belt® graduates and the recipient of the 2010 Akao Prize® for Excellence, a member of the US technical advisory group for the ISO 16355standard for QFD, a Six Sigma Black Belt, and an Net Promoter System Champion at UnitedHealth Group®.

He has been applying various aspects of modern QFD successfully in the healthcare and insurance fields. (See below for a list of some of Carey's papers). We are pleased to announce that Carey will be co-teaching the QFD Green Belt® Certificate Course on September 4-5, 2019 at the 25th International Symposium on QFD in Boise, Idaho USA.

Since its inception, the aim of the QFD Institute training has been to produce practitioners who are capable of applying QFD thinking and tools correctly and effectively in their profession for successful development of new products, services, and business processes, and by doing so, to foster the next generation of QFD practitioners within his/her organization.

Carey is a good example, and we are pleased to have him co-teach in Boise. His experience in the QFD Belt® training will be an added benefit for new students who might have questions on how to go about applying QFD in their work or tips for a successful outcome.


"QFD and Politics - A Sure Way To Start An Argument"
Carey Hepler, QFD Black Belt®, 2010 recipient of Akao Prize, Solantic Urgent Care (USA)
First of its kind, this paper examines using QFD in a political campaign. QFD is the art and science of taking the voice of the customer (VOC), and, more specifically, the top needs of the targeted customer segments, into consideration before developing a product or service. This paper discusses the specific steps of using Modern Blitz QFD® tools for an actual election campaign by his wife for a Florida county judgeship. Specifically, how to: 1) select target segments; 2) use the voice (top needs) of the target segment customers to develop the strategy; 3) create messaging; and 4) deploy the messaging to the targeted segments. [ISBN 1-889477-24-9]


"The QFD Process at Medtronic - Creating the Next Generation of Insulin Pumps and Sensors"
Carey Hepler, QFD Black Belt®, 2010 recipient of Akao Prize, Medtronic; Cary Talbot, QFD Black Belt®, Senior Marketing Product Planner, Medtronic, USA
Changes in technology and customer expectations are creating many new opportunities for medical device organizations. As the oldest and most respected diabetic medical device organization in the world, Medtronic MiniMed strives to stay ahead of the competition by quickly responding to these changes with new and improved insulin pumps and continuous glucose monitoring products. Recently, we have began using QFD to discover the unspoken customer needs for targeted portions of our population. QFD has allowed us to convert their needs into new products, services, and features to delight and attract new customers as well as retain current customers. This paper will describe some of the new opportunities we are facing, and show step by step how we are addressing them by understanding the Voice of the Customer and innovating and implementing exciting solutions. [ISBN 1-889477-23-0]


Predicting Future Health Insurance Scenarios using Quality Function Deployment (QFD) and Analytic Hierarchy Process (AHP)
Carey Hepler, QFD Black Belt®, Innovation Director, BCBS of Florida, USA; Glenn Mazur, QFD Red Belt®, QFD Institute, USA
This project used a combination of QFD, AHP, and other forecasting tools to look at possible 2008 election and policy outcomes and what new opportunities might be created to service both traditional members of health insurnce products as well as those who are uninsured in the State of Florida. The identified scenarios can be used to map and prioritize different market segments, formulate key customer needs into value propositions, determine strengths and weaknesses in their current competencies and capabilities, and then initiate service quality projects to begin improving those areas where customers will need them most. Several quality methodologies have been used to design successful products. [ISBN 1-889477-20-6]


The Many Faces of AHP - How to use AHP with Different Audiences for Maximum Results
Carey Hepler, QFD Black Belt®, Innovation Director, BCBS of Florida, USA; Glenn Mazur, QFD Red Belt®, QFD Institute, USA
Blue Cross Blue Shield of Florida (BCBSF) is the oldest and most respected health insurance organization in the State of Florida. This paper discusses the company's use of AHP in terms of audience and technology delivery, as well as the advantages and disadvantages of each of the technologies when working with the company's constituent groups. [ISBN 1-889477-19-2]


Finding Customer Delights Using QFD
Carey Hepler, QFD Black Belt®, Integrated Market Intelligence, BCBS of Florida, USA; and Glenn Mazur, QFD Red Belt®, QFD Institute, USA
Changes in market demographics and the regulatory environment are creating many new opportunities for health-care and related organizations. As the oldest and most respected health insurance organization in the State of Florida, Blue Cross Blue Shield of Florida (BCBSF) strives to stay ahead of the competition by using QFD to discover the unspoken customer needs for an underserved portion of our population. QFD has allowed us to convert their needs into new products, services, and features to delight and attract new customers as well as retain current customers. This paper describes some of the new opportunities we are facing, and shows step by step how we are addressing them by understanding the Voice of the Customer and innovating and implementing exciting solutions. [ISBN 1-889477-18-4]