The 2012 Olympics were fantastic and our British friends are to be congratulated on putting together a memorable experience for athletes and viewers alike. 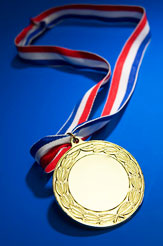 But after each series of Games, whether summer or winter, I always marvel at the discussion of which country won.

Those of us in the quality field, for whom numbers are our bread-and-butter, may be interested to know that I posed this question to Dr. Thomas Saaty, creator of the Analytic Hierarchy Process, a method for quantifying and prioritizing subjective data. Tom, I'm not surprised, has authored papers on the subject.

Most news reports go for the straight count of medals:
This assumes that all medals regardless of color, are of equal value. But what about other considerations, such as:
Dr. Saaty raises interesting questions to develop some weighting criteria, such as how long and difficult is the training, how many challengers in the world engage in the sport, and other intangibles. Saaty looks at additional factors such as national Purchasing Power Parity per person (Ethiopia wins 2008 with 161.441)  and country population from which to send athletes (Bahamas wins 2008 with 6.5433 medals per million people). He also raises the issue of how exciting the game is based on the average ticket price to spectators.

After looking at the medals from multiple perspectives in the 2010 Winter Olympics, Dr. Saaty settles on 7, 2, 1 for the values assigned to gold, silver and bronze medals respectively.

Applying this for 2012, he arrives at a very interesting observation:
Those who want to know more are recommended to read the QFDI newsletter "Decision Making with AHP (Analytic Hierarchy Process)".

Today's quality professionals should know how to apply AHP in their projects for better analytic precision, and this includes six sigma black belts and anyone who is involved with prioritization of customer needs and product features in QFD. Case studies using AHP will be presented at the upcoming Symposium.